The Royal Affair Tour Live From Las Vegas OUT NOW

Following the outstanding success of their 2019 American tour, YES have released The Royal Affair Tour: Live From Las Vegas through BMG Records.

All YES concert tours are special events for their legions of fans and The Royal Affair Tour was no exception, conceived as a wonderful celebration of the best of British progressive music. Guests on the tour were Asia (with YES keyboardist Geoff Downes and a special appearance by Steve Howe), John Lodge of The Moody Blues and Carl Palmer’s ELP Legacy featuring Arthur Brown. 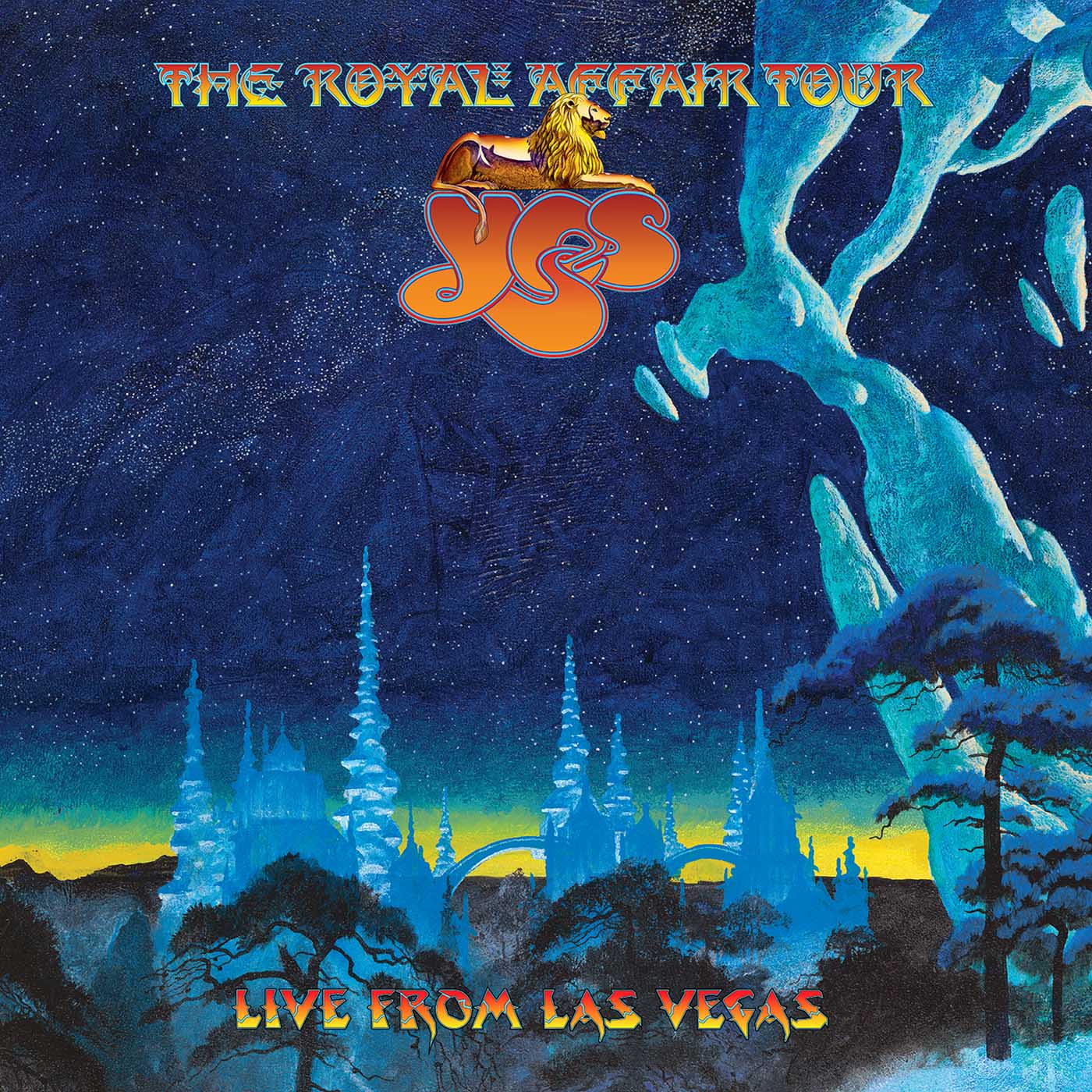 Steve Howe adds: “Having the opportunity to bring together the band members in the development of a well refined set of songs that captures the bands true potential is simply an honour for me.”

The show features many classic tracks across the period 1970 – 1980. The set opened with No Opportunity Necessary, No Experience Needed, the Richie Havens cover from YES’ second album Time And A Word (1970). Tempus Fugit was taken from Drama (1980), Geoff Downes’ first as a member of YES, while Going For The One, I’ve Seen All Good People and Siberian Khatru are from some of YES’ iconic mid-70s albums. The set included a rare live performance of YES’ cover of Paul Simon’s America and John Lodge shared vocals on YES’ cover of John Lennon’s Imagine. Soon-to-be YES drummer Alan White played on the original studio recording.

The Royal Affair Tour live set and album, recorded at the Hard Rock Hotel, Las Vegas, in July 2019, reaches a climax with two of the best-loved YES tracks Roundabout and Starship Trooper, always a high note on which to close the set.

YES are Steve Howe (guitar) who joined in 1970, Alan White, drums since 1972, Geoff Downes (keyboards) who first joined in 1980, vocalist since 2011 Jon Davison, Billy Sherwood, who played guitar/keyboards in the 1990s and was the late Chris Squire’s choice to take over bass/vocals in 2015 also played with Asia on this tour. Jay Schellen played additional drums.

The 26-date The Royal Affair Tour and YES’ performances were critically acclaimed:
“Yes proved again that they are, after all these years, still the kings of progressive rock.” (Vintage Rock)
“It was a unique night of rock music history that has endured for half a century.” (Grateful Web)
“As always, YES put on a magical show and took the crowd on a journey through their hits” (Music Connection Magazine)
“The band sounded great and had brilliant visuals to accompany the songs. Sherwood’s bass playing is perfectly suited to capture the essence of the late Chris Squire while Geoff Downes and Steve Howe are still at the top of their games. Vocalist Jon Davison… looks extremely comfortable on stage, hitting each note with ease.” (the progreport.com)

We hope that our fans are keeping healthy during the Coronavirus Pandemic.

We’re really looking forward finally to performing Relayer and other YES classics for our fans in 2021. As promised, we can now announce all of the re-scheduled dates for The Album Series 2021 Tour.

All tickets are valid for the new shows. Please check full details below.

Available as an upgrade only at future-beat.com.

Available as an add-on at the links above, for customers who already have a valid show ticket.

Available as an add-on at the links above, for customers who already have a valid show ticket.

Forbes – Alan White and Geoff Downes talk about the band’s latest live LP and working on new music during the pandemic.
Metal Music Planet – “Equally thrilling and beautiful, great music, well played will never go out of style and ‘The Royal Affair Tour: Live From Las Vegas’ is a glowing testament to that fact.”
DownBeat Reviews – “The Royal Affair Tour: Live From Las Vegas is a fine entry point for casual fans curious to know what the band sounds like today”
The Rock Music Alliance Interview – Jon Davison talks about his early career and his musical journey with YES.
Target Audience Magazine – “It’s a rare opportunity to see all of these great bands in one place.”
Broward Palm Beach New Times – Alan White Is the Most Famous Drummer You’ve Never Heard Of
Sonic Perspectives – Interview with Billy Sherwood
Niagara Gazette – Yes, Asia, ELP make for a ‘Royal Affair’ at Artpark
Biff Bam Bop – Yes Proves Itself Again As Rock Royalty on the Royal Affair Tour in Toronto
The Morning Call – Yes’s 12-song, hour-and-45-minute set certainly included all of the prog touchstones fans would want from the band and a couple of surprises.
Rolling Stone – “Giants of Seventies and Eighties prog are joining forces this summer, and they’re bringing along former Guns N’ Roses guitarist Ron ‘Bumblefoot’ Thal”
Rock Cellar Magazine – “This summer will be one to cherish for prog-rock fans.”
IHEART Radio – “Each night will be busy for the guitar great Howe, who is also set to perform with main support act Asia, a group he co-founded in 1981.”
PiercingMetal – “This is going to be a tour for the record books if there ever was one.”

FLY FROM HERE – RETURN TRIP – The remixed version of Fly From Here feat. new vocals from Trevor Horn and an additional song.